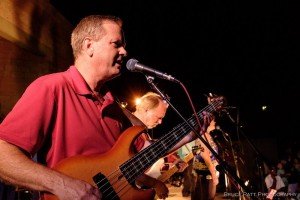 Tony grew up in San Jose, the son of a musician and music teacher. He began playing music at the age of eight, taught by his father. He played trumpet, other brass instruments, saxophone, piano, and bass guitar and played in numerous bands touring the west coast while finishing a business and vocal music program at CSU San Jose and teaching credential at CSU Sacramento. A member of On Air during the ‘90s, Tony left to raise a family and pursue a career in education, and reunited with the band in 2010. He is married with two adult children.