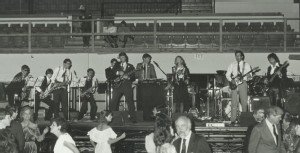 In early 1985, the band entertained at a fashion show/benefit in the almost-completed original Arco Arena on North Market Street in the Natomas area, the temporary home to the new Sacramento Kings who were just moving from Kansas City. Since this was the first event held there, the group was the first band ever to perform at Arco! Several future members of On Air can be seen on the stage. L-R: Brian Nakagawa, Mike Compton, Chris Curtis, Bill Gee, Jim Cosentino (partially hidden), Bob Lang, Ray Nelson, Janet Wilde, Brian Cutler, Rex Dayton. Brian, Mike, Chris, Bob, and Rex became future members of On Air, although Chris departed quickly. Still, he left his mark: he was responsible for naming the group, inspired by the on air lamp above the studio door at the television station where Bob was employed. 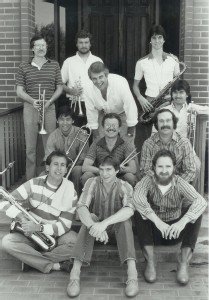 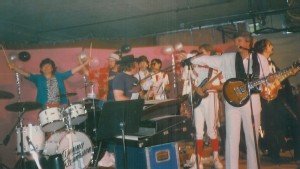 Bob introduces Dennis at a performance at the annual Beaux Arts Ball in the fall of 1985.  Bob and Dennis were college mates in the mid-‘60s. 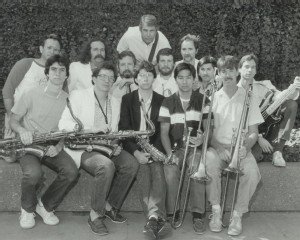 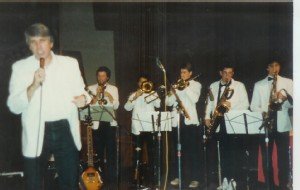 Bob and the horn section performing “Mack the Knife.” 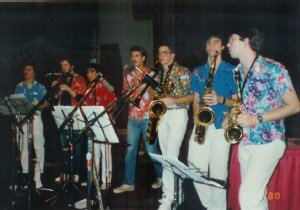