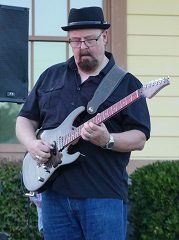 Garry was raised in Vallejo and performed in a variety of cover and original bay area bands throughout the mid seventies. He relocated to Sacramento in 1979 and received his teaching credential in 1979. His influences are Eric Clapton, Jeff Beck, and Jimmy Page, “pretty much in that order.” Garry’s married with teen-aged son.