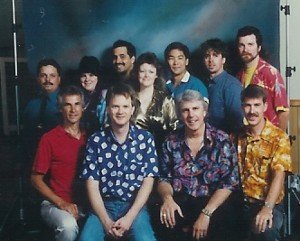 For a long time this photo was the source of a mystery. There’s a face in the group that none of the band members recognized. All the normal instruments are represented by familiar faces with the exception of keyboard, but no one could remember him until recently…Ken Pimentel. Apparently he was brought into the band, but never made any rehearsals. Then he showed up at this performance in Marysville, played the gig, and was never seen again! Back row, L-R: Vahan Kachadorian, Katie Mathew, Ken Billeci, Elaine Lord, Brian Nakagawa, Ken Pimentel, Greg Evans. Seated: Toby Kramasz, Tony Oddo, Bob Lang, John Weir. 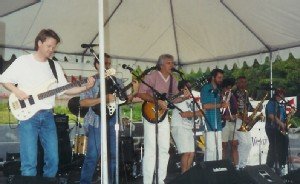 On Air began performing at several summer concerts including a long stint during the California State Fair on the Waterworld Stage. As a result, that summer the band’s sound tightened up remarkably. But On Air was struggling to keep drummers and keyboard players and each time someone was replaced, the entire band had to stop and bring the new musicians up to speed. L-R: Tony Oddo, Ken Billeci, Bob Lang, Vahan Kachadorian, Greg Evans, Brian Nakagawa, Toby Kramasz, Katie Matthew. 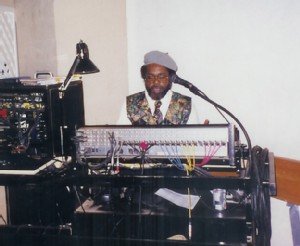 Lare Crawley ran audio for On Air for nearly 20 years. (Craig Yamamoto has the job today.) 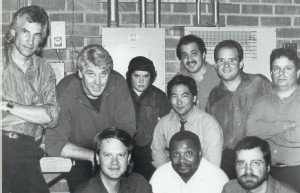